How to Switch to the Mac

…and enjoy doing it.

Update: revisions for 2017. You may also want to visit my Switch page, which tries to list suitable macOS replacements for common Windows applications.

When I started this document in February 2007 (a full decade ago), a lot of people were moving to the Mac, so I thought I’d jot down a few notes about my experience during the decade before that. This page was updated on a yearly basis for a while (usually around the holiday season, which is when I get the most visits from new Mac owners or people pondering the switch), but in 2017 I noticed that five years had gone by, and decided to revise it a fair bit because it is still one of the most popular pages on this site, and circumstances have changed in numerous ways:

But the basics are still the same – motives for anyone switching will not be discussed here, since discussing relative merits of computer platforms is very much like discussing cars, and therefore largely unimportant if you are getting what you want.

My main point is therefore that quasi-religious beliefs that any platform is better than another are not just irrelevant, but plain childish and stupid. Before maligning the Mac, Windows or Linux, make sure you know what you are talking about – most people in the IT business have “pet hatreds” towards one platform or another out of sheer ignorance, and more than two decades in the business has shown me that anyone who only has bad things to say about any given platform probably doesn’t know what (s)he’s talking about.

So if you know you want a Mac, you’ve come to the right place for a few basic hints that might just save you a lot of time.

The major “under-the-hood” issue for non-Mac users is the underlying UNIX foundation1 of macOS – it not being Windows makes some people nervous, but, in the end, what matters is the user interface and the way it makes most simple tasks a lot easier to accomplish.

The second (and quite frequent) issue is compatibility. Which, by the way, has long ceased to be an issue at all.

Now that Macs are also Intel based, that usually comes in two flavors – document compatibility (not really an issue these days – see my software replacements page for more info on specific apps), and the ability to run other operating systems, like Windows.

The bottom line on that is: You can do anything on a Mac, period. Most relevant applications are available for both Windows and the Mac, and there are several working Virtualization solutions to run another operating system in a sandbox.

There are currently four main options for doing that: The first to appear was Parallels, which has been around since roughly mid-2006, and VMware’s Fusion, which reached public beta on December 2006 and was soon after released commercially. The third alternative, VirtualBox, has also been around for a while and is free for personal use. The fourth alternative is the hypervisor now built into macOS, which that can be used via xhyve, Docker and other front-ends.

And, of course, you can always dual boot Windows or Linux using Boot Camp.

These will not be discussed here at length, since the main point of this document is to ensure you feel at home in macOS as quickly as possible. But they are recommended if you need to ensure a smooth transition where it regards specific applications that may not be available on the Mac – you’ll be able to keep all your old applications running alongside the new ones.

As to the bulk of this guide, the target is non-technical folk. However, I do throw in a few hints for people who are coming to macOS with some computing experience and expect some “best practices”, so don’t worry if some points are a bit too technical.

Buying a Mac is not a normal experience anywhere. It’s a local thing, best done with local people (pun intended). In Portugal, where I live, that was problematic for a long time due lack of “real” Apple stores, the recurring problems of the local retail chain and the quasi-underground nature of most user groups.

We got a few premium retailers the last few years, but in September of 2017, there still isn’t a single “normal” Apple store in Portugal for some reason.

However, picking which Mac to buy (and when) is pretty straightforward. It’s mostly a matter of visiting the Apple site, reading the Macrumors Buyers’ Guide to figure out how recent each model is relative to the full lineup (taking the predictions there with a fairly large dollop of salt), and then finding a store that stocks it (some people order theirs online – others, like me, want to go out, get it, and come back again without all that waiting around nonsense).

If you happen to buy a second-hand machine (which is common given the flurry of upgrades brought upon by frequent updates to the portfolio), you should check the CPU type. Most machines beefier than a Core 2 Duo should be able to run Sierra or High Sierra, but “plain” Core Duo and Core 2 Duo machines (as well as ancient PowerPC gear) are pretty much dead in the water these days given that Apple is phasing support for both.

In any case, when buying second-hand make sure you plan for an upgrade to at least 8GB of RAM (or more), since macOS has become somewhat more demanding in terms of resources and RAM is the easiest, cheapest way to breathe new life into an old machine.

Although the MacBook Air has profoundly changed the game was far as form factors are concerned, this MacWorld piece (dated 2008, but amazingly still applicable in terms of scenarios) provides good food for thought – and a quick look at Apple’s site will give you all the details you could possibly want.

I will not go into warranties, support or suchlike – this is, again, a local affair, invariably dealt with by local people and legislation, and stuff like AppleCare isn’t available everywhere. So far, I’ve been lucky – a problem one of my Macs had (an original 15” flat panel iMac, which I started out in and since gave to my parents) was fixed within three weeks2. It had a power supply failure, and fixing it required shipping a replacement part to Portugal. A similar thing happened to my iBook a good while ago, and the experience was mostly the same.

There is some controversy as to what amount of dead pixels warrants a replacement – search the Net for more info – but this is the kind of thing you want to check for right away to take advantage of any “immediate return” policies.

If you bought a second-hand machine with an optical disk drive, you can often boot the Hardware Test off the first install CD (insert the CD and hold down Alt – or Option, as it is called in older keyboards - while the machine boots).

Amongst other things, it performs a display test – which is fundamental for picking up “dead” pixels before you start installing stuff (I used to use ScreenQuery, a simple app that filled the screen with solid colors, but it seems to have vanished). As usual, the smaller the screen, the less likely you are to have dead pixels.

You can create a “regular” user account in System Preferences after setup ends. This will not prevent you from making all the silly mistakes people do when using a Mac for the first few months, but it will significantly decrease the odds of you breaking something (you will be asked to authenticate as an administrator before any significant changes are made). Not to mention that it prevents unwanted changes to your system…

Many people think this is unnecessary until they discover (the hard way) that they threw some important system file into the Trash, or that some application took advantage of their latent administrative privileges. Yes, there are warnings and elevation prompts, but using the machine as an administrator tends to make people oblivious to them and years of using all my machines as a “regular” user bestowed upon me painless system updates, zero trouble with the core system and no software instability whatsoever. In the end, it’s your call – I’m just providing time-proven advice…

(Yes, you can break a macOS install – or files that make subsequent upgrades fail – by mistake when you use the machine every day as an admin user. And yes, I will be repeating this advice several times).

An Aside On Firewalls

The firewall is deceptively simple, but quite sophisticated – for instance, you can set access permissions on a per-application base (very useful if you have to run things that keep checking for updates without a way to disable them). If you want something better that tracks individual inbound and outbound connections as they are established, I personally recommend installing Little Snitch, which will not only let you control what each individual application tries to do and define rules for several typical scenarios.

What not to do:

Things You should do:

These started piling up a bit, so I decided to group them together in a single section.

If you’re a hard-core Windows user and the Mac’s way of dealing with Home and End really bugs you, here’s a tip from Aaron Adams (the original link vanished, so this seems to be the only remaining copy of this tip on the Net):

Alternatively, you can use something like DoubleCommand to change global key bindings that System Preferences would ordinarly not let you tweak. But if the Terminal is the only place where the default behavior annoys you, the terminal preferences themselves allow you to customize key bindings and the relevant escape codes.

Finally, there are plenty of resources out there regarding using external PC keyboards on the Mac and re-mapping keys in a straightforward fashion. The Windows-to-Mac Key Switching at Ars Technica is one such example.

As mentioned above, these won’t cover Boot Camp, Parallels or Fusion. Think of this as a list of things that are different in macOS and that you will need to get accustomed to.

One of the first things I recommend you do is to go into Keyboard Preferences and: 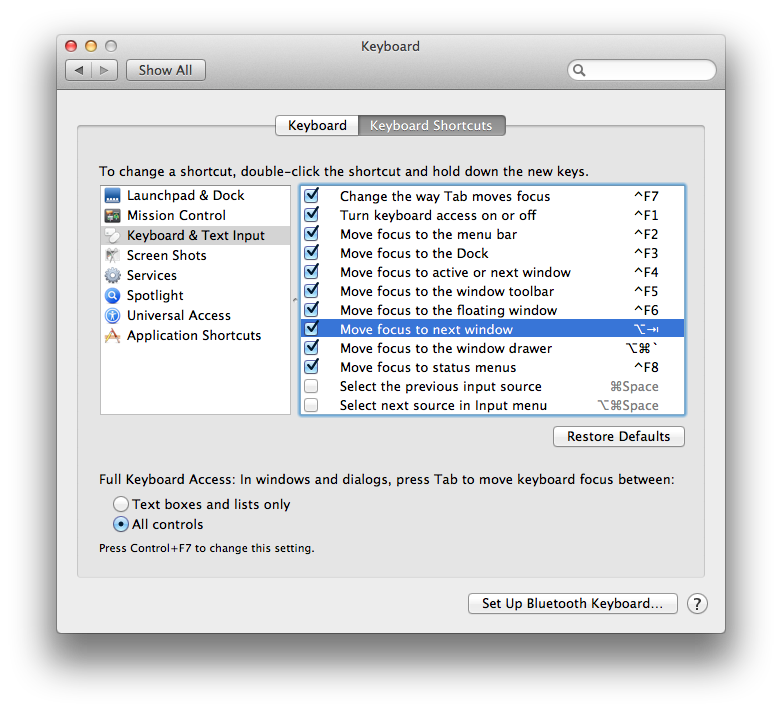 Besides that, you should keep these tips in mind:

One of the things people ask about the most is how to access external hard disks formatted in NTFS. macOS has built-in read-only support for NTFS, so you can access your data just fine in most cases (the only exception is if you use NTFS encryption, which is not completely supported by anything other than Windows right now).

If you really need to write to NTFS volumes, there are currently two main options:

I now have an entire page devoted to apps that switchers may be interested in, but the following summarizes my own experience and may be of general interest:

I originally went out and bought a copy of Microsoft 2004 – I now use Office 365, but many people will probably be OK with iWork for home use.

Since the move to Intel, the only other “essential” was some form of virtualization to let me use some odd Windows application or tool every couple of months or so. I currently use Parallels, but you may want to look at alternatives.

Besides those and some of the utilities I mentioned above, my current list of “essentials” is:

And that’s it, really. I hope that this guide proves useful to get you started. Feel free to drop me an e-mail if you have any suggestions for improvements, and consider donating to the site.

But, most importantly, enjoy your new Mac.