What this is not: This is not an attempt at keeping track of every mention of the iPhone, concept designs, re-hashed PR, near-identical transcriptions of articles from news agencies, mentions of an Apple MVNO, links to rumor site drivel, and a lot of pie-in-the-sky ideas that are usually floated by pundits (who often have absolutely no idea of what is involved in developing phone hardware). 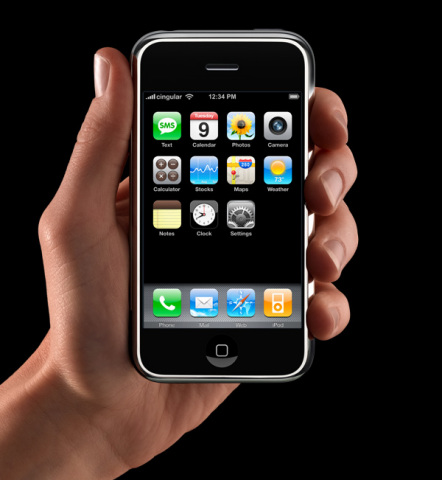 The iPhone is Apple’s foray into the world of mobile phones, and the first generation device was announced in January 9th 2007 after years and years of speculation.

I decided to start keeping track of relevant (or irrelevant) mentions of it around mid-2004 or so, a few months before the ROKR launch turned the whole affair into something of a bad taste soap opera.

Although I don’t really keep track of iPod Touch news, there is a pattern of sorts to iPhone, iPod and OS announcements and releases – the iPod is usually released without any announcement delays. There’s a more detailed one on Wikipedia, too.

At the time I started doing this (and for a very long time up to the actual announcement), I found the notion of Apple doing a mobile phone somewhat ridiculous, since there was no clear intersection between the iPod and mobile phone markets and there was already far too much bloat on phones.

Furthermore, Apple would have to deal with a lot of regulatory (and technology) issues that were not part of their core business, and they would always have significant difficulties where it regards being able to control the entire user experience from the moment they attached something to a carrier.

Steve, however, turned the entire notion on its head and, after the ROKR fiasco, decided to do precisely that: acquire the required expertise, build (or design) the hardware from the ground up and create (in opposition to the prevalent ethos of most phone manufacturers) a virtually closed, Apple-centric mobile phone.

Their going with AT&T was not an accident (what with Cingular being notoriously lacking in advanced mobile services), and their European strategy was necessarily different. Apple has, in fact, pulled a substantial stunt in the US regarding the way they manage their relationship with carriers, even though their going with EDGE at the beginning meant that the initial device had little practical interest to operators in UMTS-enabled (and HSDPA-driven) Europe – something that changed markedly with the 3G device.

Here it is, without further ado, broken into sections, and excluding the iPad and the iPod Touch for simplicity’s sake:

I also keep a set of pages for development resources, some notes on the Safari variant that runs on the device and a few others on the hardware, now mostly outdated.

My own opinions are interspersed where appropriate, and you can also read my first impressions (post-launch) and mull on the fact that it didn’t seem to include any particular Assistive Technologies on the first release – only on the 3GS did those become a reality.