The iPhone was launched two months ago, and on that very same date (to considerable curiosity from my readership), I got myself a new phone: 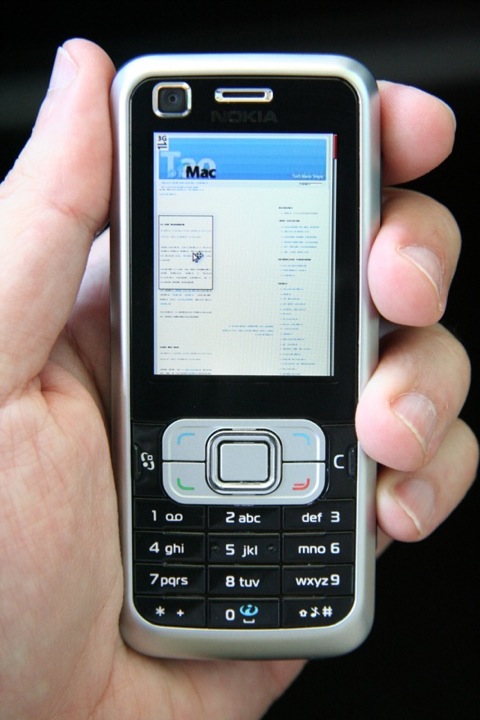 And yes, it’s a Nokia 6120 Classic, and today I’m making available my notes on it, a working iSync plugin, and a working Nokia Multimedia Transfer profile, both of them completely unofficial and unsupported.

They are attached to this page (check the bottom table) and are the result of an evening’s tinkering with what is, as far as I’m concerned, the best all-around S60 device Nokia is likely to ship all year.

It has been commercially available in Portugal for a couple of weeks now, but I only managed to spot one in FNAC last weekend – where it was being sold for Eur. 279 (inc. VAT) – which means that I can now write about it (to a point, of course).

Then again, I don’t exactly go around looking at phone shop displays, so it might have popped up earlier. All I do know is that they are sure to go for considerably less with a contract, but you get an amazingly good deal even if you want to pay the full price.

And yes, it is better than the iPhone from my standpoint. For starters, it has HSDPA support, which means I can use it as a high-speed data modem wherever I happen to be, download podcasts over the air, you name it.

But let’s not get ahead of ourselves here. What made me switch (even if temporarily) from the Pearl? There were, as usual, five main things:

1. I realized that I didn’t need e-mail on the go

At least not all the time, and certainly not regarding being able to reply to it on the go.

I have a perfectly good laptop, plus all my corporate affairs are dealt with via Citrix, so I have ready access to my usual environment from any machine I work on.

And, if you think things through, you realize that the added value of being able to reply to e-mail on a handheld is pretty much nil, since composing the best possible reply requires time, a decent keyboard, and (this is the deal breaker for smartphones) ready access to a lot more information than just that single message.

Although the BlackBerry still reigns supreme in terms of e-mail handling and the consummate ease of dialing up anybody on my address book or on the globe-spanning corporate directory, I realized that there was little to gain from composing quick, short replies in a pinch – you’re not really solving any issues by doing that.

Getting things done is usually best accomplished by calling people a lot more and writing more thorough replies. Unless, of course, you’re in the middle of a product launch, or traveling a lot – both likely reasons for my eventually going back to a Pearl some day (but not just yet).

And, as you might expect, what I really needed was an easy way to sync the phone to my Exchange calendar, which this phone happens to be able to do – even if with some caveats, which are likely to disappear if Nokia decides to update its ActiveSync software to support this model.

If you really want to know, it does support @[email protected] IDLE properly, as well as standard SSL and StartTLS. You can also add your own certificates to it.

The 6120’s casing is slim, discreet, refreshingly unobtrusive. It understates the device’s power and flexibility, and is a very welcome change from Nokia’s usual (and often irritating) penchant for “original” (if downright ugly) design.

As a result, the device feels right. It’s well-balanced, solid, can live in my pocket alongside my keys, etc. It’s roughly 1cm narrower (and shorter) than an iPhone (if you care about that – I tend to like my phones small).

And, like the Pearl, it has a standard mini-USB plug. Nokia seems to be dumping that in favor of yet another semi-proprietary sub-mini design in newer models – which, incidentally, is an incredibly asinine move – but it is a godsend for me, even if it doesn’t charge the phone.

Nokia’s is (short of the iPhone’s), the best built-in mobile browser of any current handset, and the 6120’s implementation is fast and can handle pretty much any JavaScript thrown at it (expect more news on that soon, as I’m slowly porting my @[email protected] front-end to do mobile Ajax).

I can also run Opera Mini 4 alongside it, but that’s besides the point – I can surf to any web page at HSDPA speeds with the 6120’s built-in browser, and use its RSS reader to keep track of podcasts – which I download on the go to the SD card.

And, unlike the N95, the device can actually render the pages speedily (almost as fast as an E90).

In the S60 universe, there is no faffing about with HTML to build pseudo-applications, no need to hack things to pieces to get your code in, and you can actually get an SDK for it (which was, like, kind of the whole point behind Symbian). In short, you’re dealing with a mainstream environment and not a niche-within-a-niche thing.

So there are oodles of native applications that run just fine on the device. Sure, you can geek out and install Python on it (which I have, with predictably nil results as far as real life usage is concerned), but that’s beside the point here.

Anyone who gets one of these will have no shortage of software to run on it (and, of course, a bazillion games), and you’ll notice that there is a lot of choice – for instance, I was able to find three Twitter clients, there is a native Jaiku client, plenty of mobile blogging approaches, etc.

This was one of the deal clinchers for me. Although the 6120 does not have a built-in GPS, I find that there is hardly any point in having one on a phone anyway – they’re useful, sure, but never for driving, and mostly as gimmicks.

But my point here is that the Nokia Maps application knocks the spots off Google Maps (and BlackBerry Maps) in terms of content. I used it on an E90 for a good while, and I think I’m hooked on it.

Whereas Google Maps can’t find most street names and has zero points of interest for Portugal, Nokia Maps lead me to coffee shops, restaurants, pharmacies, hotels, you name it – its POI data is pretty good in terms of updates and accuracy, and the UI easily beats Google’s on this phone.

And the difference where it regards map and POI data is not just relative to Portugal – I was also able to find a couple of addresses in London, a restaurant in Milan, etc., none of which Google Maps had any knowledge of. Oh, and Nokia knows we use the metric system – Google persists in reporting distances in miles.

Plus you can easily share landmark data with other people using Nokia phones – just send the landmark over as an MMS, and anyone with the app can get there.

But… Isn’t It Crufty?

Yes, it’s far from perfect – after all, Nokia still needs to fix a lot of things on their phones. But as far as Nokia devices go it is simple, solid, and reliable (it may well be the only mobile phone I’ve used in the last few months that I couldn’t get to crash inside of an hour).

And, in the end, its openness compensates – for instance, I was able to add support for Chinese characters and tie it to iSync and Nokia Multimedia Transfer after only a few hours (all told), I can transfer anything I want over Bluetooth and USB, etc.

That, I think, is the lesson Apple needs to learn. The iPhone is brilliantly designed, has a supremely satisfactory user experience, but it feels, in a way, like the smartphone segment’s “Rain Man”:IMDB:tt0095953 – wondrous storage, polished performance, but low social skills and the inability to do simple things that most people take for granted.