The Tungsten W is Palm's first combo PDA/Phone, and has full GSM and GPRS functionality. 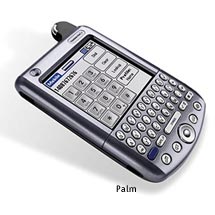 It is a Palm OS 4.1 device with a hi-res 320x320 screen, and includes VersaMail (in ROM) and WebPro (on the bundled CD). It can only be used as a phone via the included headset.

It actually grows on you. Not being able to use Grafitti by default forced me to appreciate some of its finer design points, and it feels a lot like a Blackberry device. Your mileage may vary

Well, it's a first generation device. It will get smaller (and, preferably, more metallic) over time, and the next model will have to have a proper microphone and speaker arrangement.