MediaLink is a “DLNA”:Wikipedia:Digital_Living_Network_Alliance (UPNP) media server that works as a Mac OS X preference pane, providing what is probably the most seamless and hassle-free way to share media content between a Mac and a “PlayStation 3”:Wikipedia:PS3: 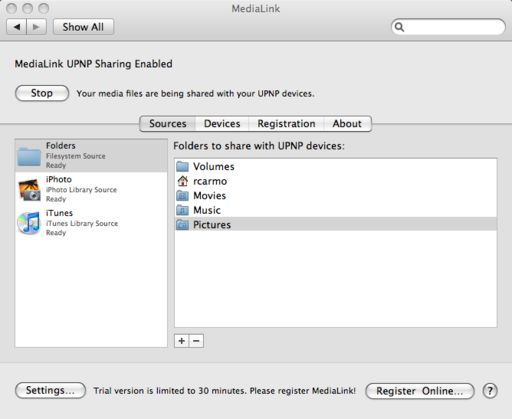 Despite some (other people’s) complaints about Nullriver support and some personal reluctance (since their companion PSPware product hasn’t been updated to support PSP firmware 3.x, and looks like it never will), I eventually decided to purchase a license after testing some of the alternatives (like Elgato’s EyeConnect), since it worked vastly better for me and was about the right price.

Not only did it generate sane navigation trees of iPhoto and iTunes content (including Apple keynote podcasts), it also generated thumbnails of most media files correctly, something none of the other alternatives did as well.

If you already own a “PS3”:Wikipedia:PS3 and have been considering an Apple TV to watch the odd video podcast1 and putting up photo slideshows on your TV, this is at least worth checking out.