Update: since my original post a security issue has been identified in the installer, which was creating files with incorrect permissions. I’ve added the fix as a new footnote5.

Thanks to Microsoft having made available a set of press copies, I’ve just installed Office 2008 (the Expression Media edition)1, and will be posting on my experiences as time permits.

For those of you not keeping track, I’ve been an Office 2004 user for years now (it was the very first piece of Mac software I bought, back when it came with Virtual PC).

Which hasn’t stopped me from regularly checking out OpenOffice, NeoOffice – and, of course, iWork (‘06, mostly – the ’08 edition failed to capture my attention after the 30-day trial, and has been languishing on my hard drive for ages now…)

However, I’ve always had a number of issues with any of them – OpenOffice has yet to deliver a native, working Mac version (and is cumbersome and unintuitive under Linux, through no faults but its own2), NeoOffice is slow and lacks visual polish, and iWork, despite not lacking visual polish, still has issues with file formats.

Oh, yes, of course, those with less demanding needs for compatibility may be OK with slight loss of round-trip fidelity for the occasional letter or balance sheet3, but after a while you start getting seriously annoyed at simple things like text spacing, tab marks, and, of course, graphical conversion.

Just you try editing a really complex spreadsheet, document or even slideshow presentation and getting it back to your colleagues completely unscathed all along the way – when you create or review the kind of documents that I have to deal with (hundred-odd page specs crammed with revision marks, financial data crammed with non-trivial formulae, and slides with complex layouts and diagrams), the kind of glitches that Office alternatives revealed became unbearable to the point where I simply gave up and started using Citrix for everything, which also happened to solve quite a few other issues (like making it possible for me to run any corporate application and changing laptops in 5 minutes flat).

And so it has been, to this day.

Right off the bat, I can say that I’m impressed. Even though the old drag-and drop approach was, well… dropped, installation was smooth, and I was happy to find a (continental) Portuguese spell checker: 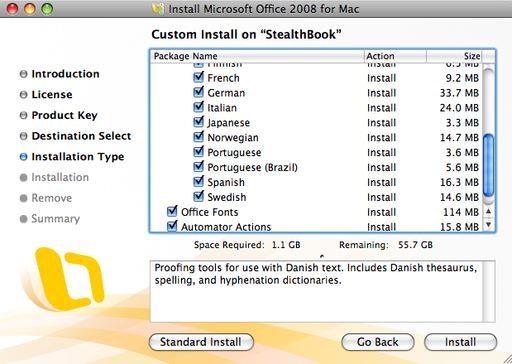 Near the end, the installer asked permission to remove the old version of Office and migrate old data (my old Entourage store, custom dictionaries and whatnot), after which I was free to play around.

One thing that cross-platform users of Office will like is that this particular Mac edition no longer defaults to the irritating start-up window (the “Project Gallery”) asking you which kind of document you’d like to create and just opens a blank document on the application you launched and gets on with it4.

Another is that a lot of my muscle memory (like using Ctrl+Shift and arrow keys to move paragraphs of text up and down) translates across perfectly, so I don’t need to learn a whole new set of accelerator keys.

As far as I’m concerned, and after a brief tour of all the apps, it feels a lot friendlier than Office 2007 on Windows, which is good. The 2007 edition’s garish ribbon does not dominate the UI – you get a normal-looking Mac toolbar and a discreet set of tabs that, when clicked, expand to reveal a similar ribbon, but which are otherwise quite unobtrusive.

This is much better than the Office 2007 approach, since it not only saves on vertical space but is also a lot less distracting (and from what I’ve seen so far, things seem to be grouped in slightly different ways). And, of course, you have the usual Mac Office tool palettes handily available.

The only real downside so far? I’ve lost the ability to Quick Look at any and all forms of Office documents, including the ones that Leopard was already able to preview (with or without iWork installed). Which, to be quite honest, makes me wonder if there was enough testing done on Leopard – now that I’m used to tap the spacebar to get a glimpse of a file, it seems like a glaring omission.

Of course, there’s nothing like some thorough testing, so the next few weeks will be a hodgepodge of real-life use and some decidedly (and purposefully) odd use cases, like fishing out decades-old documents and seeing if the new Office can cope.

Going forward, I plan to write a small piece focusing on each Office application, rounding up things in a final story oh, sometime within the next month or so.

1 Which comes in a tasteful pale satined box instead of the horrific plastic contraptions previous MacBU products used to ship in.

2 It is not much better under Windows, and the only version I find bearable is a “portable” one that dumps all the junk to be able to run off a USB stick – albeit it is still somewhat unintuitive there as well.

3 So yes, please, do say that it works for you. Just bear in mind that it does not work for me, regardless of the amount of proselytizing you feel compelled to instill into your comments.

4 Project Gallery does, however, get its own icon on the Dock, which is a minor irritant and easily dealt with.

5 Here’s the two command lines that will fix Office permissions: