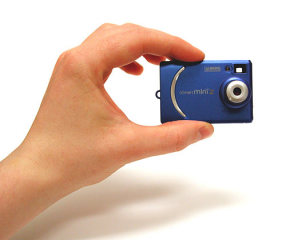 A very cheap digicam (I bought mine originally at 55 Euro at FNAC) that takes pictures up to 1280x960. Contrast is relatively good, but there is a pronounced green/blue shift.

There is (finally) a Mac OS X driver that allows you to import stills into iPhoto. There is no known way to use it as a webcam or import movies.

The camera's biggest drawback resides in its lack of EXIF support (especially since it does not have a built-in clock), but for a "toy camera" it's pretty good (and resilient - mine has survived my kid cousins).

There is also a Linux driver for gPhoto and (maybe) some kind of support from IOXperts.

← The Windows Conundrum and My Take on Blaster After the PDA, the Personal Server →